“The Universe and Art” exhibition in Singapore starts on April 1!

“The Universe and Art” exhibition is touring to Singapore and will be on view at ArtScience Museum, located within Marina Bay Sands from April 1, 2017. Check out "the portal to the universe" that appears in Singapore!

Tour of “The Universe and Art” exhibition + autograph session courtesy of Sorayama Hajime, creator of the popular Sexy Robot !

A tour of “The Universe and Art” exhibition will be conducted by Sorayama Hajime – internationally renowned as designer of the AIBO robot dog as well as seductive robots such as that gracing the jacket of Aerosmith album Just Push Play – in conjunction with “The Universe and Art” curator Tsubaki Reiko. Sorayama will also reveal the story behind the creation of Sexy Robot, and after the tour, sign autographs in the Mori Art Museum auditorium for purchasers of exhibition catalogues and merchandise. 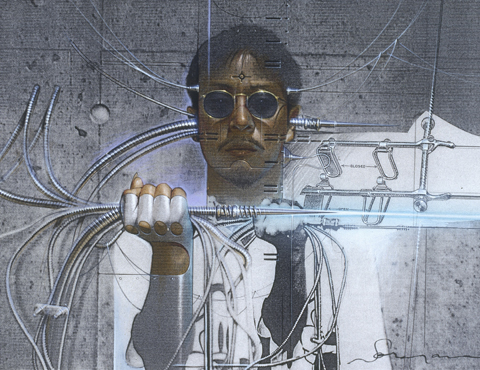 Born 1947 in Ehime, Japan. Graduated from Chubi Central Art School in 1969. Since becoming freelance in 1972, following a stint at an advertising agency, Sorayama has reached legendary status both at home and abroad with his extraordinarily realistic works pursuing the beauty of the human body and machinery. His “Sexy Robot” series (1978–), which expresses the beauty the female body in the form of a robot, had a great influence on the image of robots thereafter. He received the Good Design Award Grand Prize (Ministry of Economy, Trade and Industry) and Media Art Festival Grand Prize (Agency for Cultural Affairs) for his role in the concept design for Sony’s AIBO robotic dog.

On Saturday, December 17, 2017, the Museum will launch a range of products based on the anthropomorphic visuals (on display since Wednesday, November 23) created exclusively for “The Universe and Art” by Final Fantasy character designer Amano Yoshitaka and inspired by Meteorite Sword, one of the biggest drawcards of the exhibition. An unmissable opportunity for Amano Yoshitaka fans and sword enthusiasts of all stripes to purchase these irresistible souvenirs of the exhibition. 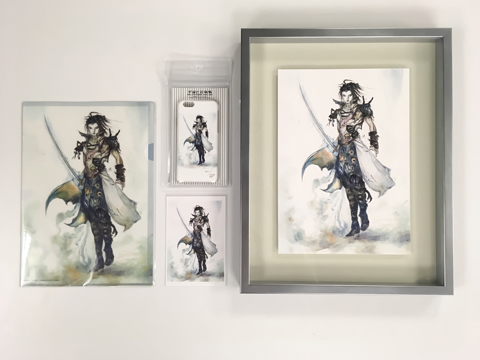 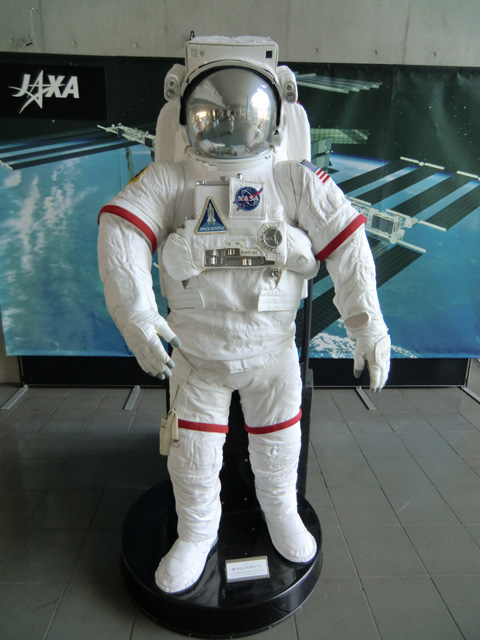 A JAXA spacesuit has been set up near the entrance hall, giving visitors the chance to take the ultimate space shot to mark their visit to the exhibition!

Visual inspired by the Meteorite Sword by popular illustrator Amano Yoshitaka will be unveiled!

On Wednesday, November 23, 2016, as part of the “The Universe and Art” exhibition, the Mori Art Museum will unveil visual inspired by the Meteorite Sword, with an anthropomorphic twist, by popular illustrator Amano Yoshitaka, whose prolific career includes character design for the Final Fantasy series.
Amano Yoshitaka's unique take on the world will make this display a must-see for followers of the illustrator and sword enthusiasts, and a great bonus for anyone viewing the Meteorite Sword. 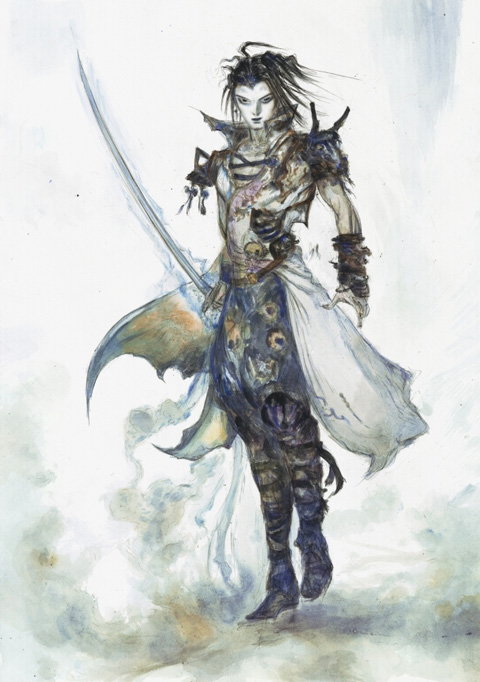 Concept for the visuals

According to Amano Yoshitaka: “Landing on earth from deep space, a shooting star sword takes the form of a beautiful blade. The sword's mysterious glow is about be unlocked, revealing its hidden power. With what will it do battle, and what will it slay?” 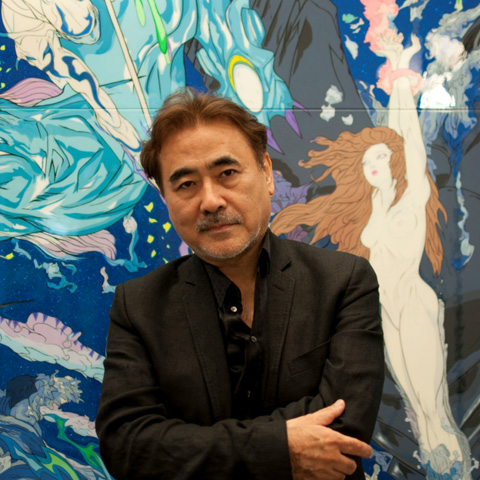 Announcing a “Shooting star ticket combo” for admission to “The Universe and Art” and “HUAWEI presents StarrySky Illumination”! 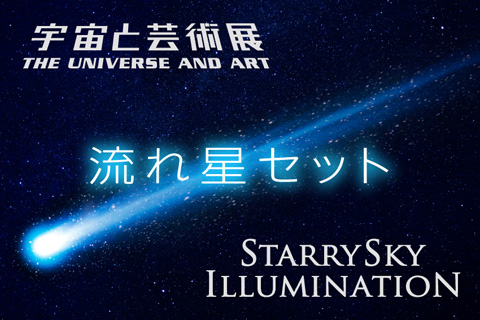 A “Shooting star ticket combo” for “HUAWEI presents StarrySky Illumination” – to be staged at the Tokyo City View Roppongi Hills observation deck (November 23, 2016 - January 29, 2017) and “The Universe and Art” will go on sale Wednesday, November 23. This great deal represents a saving of 600 yen on the combined admission price for these events, and is the perfect way to enjoy the diverse views of our universe offered by “HUAWEI presents StarrySky Illumination” and “The Universe and Art.” 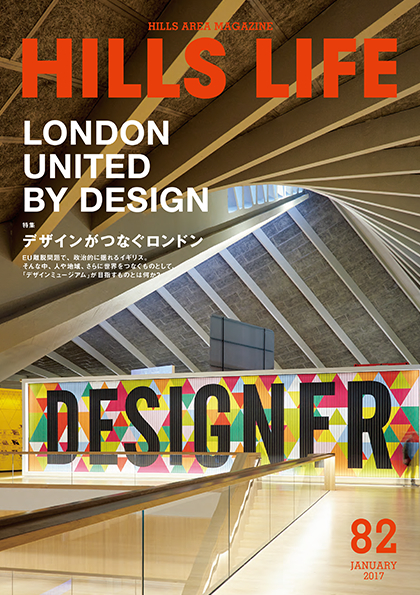 Interview of Tom Sachs, participating artist of "The Universe and Art," and Fujiwara Hiroshi, creator who has been leading Japanese cultural scene in music and fashion, is appearing in "Hills Life" Vol. 82. Check out the article here (in Japanese Language only).

From Thursday, October 20 the Mori Art Museum will offer original items designed by a Japanese TV talent, Shinohara Tomoe, who serves as the navigator for the exhibition’s audio guide.
Shinohara’s cosmic design in accessible pastel hues adorns a range of merchandise to delight young and old, essentials for the long autumn nights as the best season for stargazing begins.
On your visit to “The Universe and Art,” do take a moment to stop and browse this very distinctive range of products.

Here, I present a colorful version of my beloved night sky! Stargazing has been a favorite activity of mine since childhood, and for me, space is a special, vibrantly hued place that never fails to make me feel good.
I hope you enjoy my pastel view of the universe! 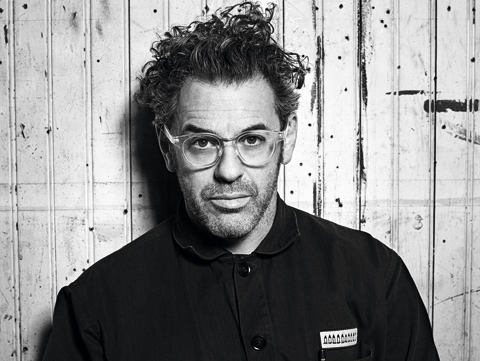 Commemorating the visit of “The Universe and Art” participating artist Tom Sachs, we’ve decided to hold an autograph-signing session exclusively for those who purchase the exhibition catalogue on Friday, October 21, 2016 (after the “Artist Talk & Film Screening”)

Installation shots and photo reports for workshop of “The Universe and Art” exhibition are now uploaded on our Flickr. You can check them here! 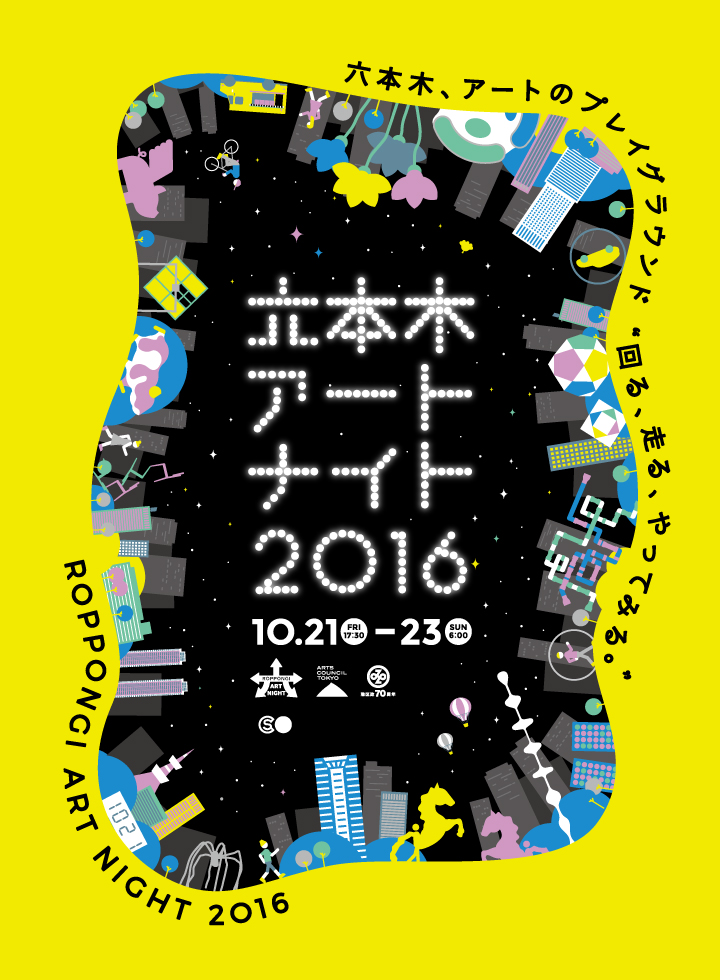 Roppongi Art Night 2016
Roppongi Art Night is an all-night, festival of art staged throughout the streets of Roppongi. The extravaganza spans the whole of the Roppongi district, centered on its art museums and other cultural institutions, large-scale building complexes and shopping centers, and features a range of events from art exhibits, music and performances to public discussions. During the Art Night, museums stay open late and offer discounted admissions. As well, the local shops and restaurants offer various special services.

Notice about the Audio Guide Rental
From October 21 to 23, audio guide devices will be available for rent during the following hours only:
Time: 10:00-21:15
Thank you for your understanding.

A very popular TV program “Bura Bura Bijutsu/Hakubutsu-kan (Wander around Museums)” that is to be aired tomorrow, Friday, September 23, will feature “The Universe and Art.”
Check it out and wander around the exhibition!

Special TV program by NHK featuring “The Universe and Art” will be broadcasted on Respect for the Aged Day, September 19, 2016.
The exhibition crosses-over multiple genres such as science, art, history, literature, stimulating interests and imaginations of everyone.
Kojima Ruriko, a TV talent, and Hirano Keiichiro, Akutagawa Prize-winning novelist, walk through the exhibition together and explore the universe, a target of human perennial interest and as well experience the “infinite expansion of time, space, imagination.”
How would this time-travel be like?
Don't miss the TV program!

[THE SUN Change of Opening Hour]

THE SUN will be closed at 5 p. m. on December 31, due to the event.
Thank you for your understanding. 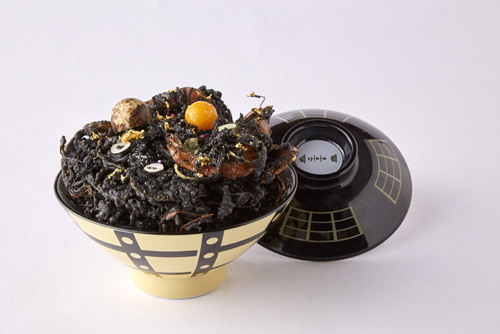 Cosmic culinary experience guaranteed! A tempting black hole of a donburi that will suck you right in... 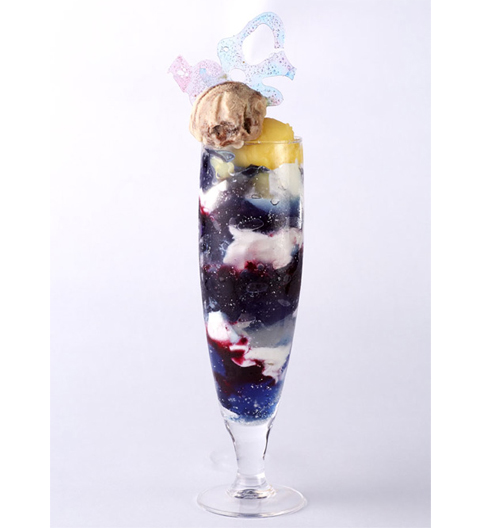 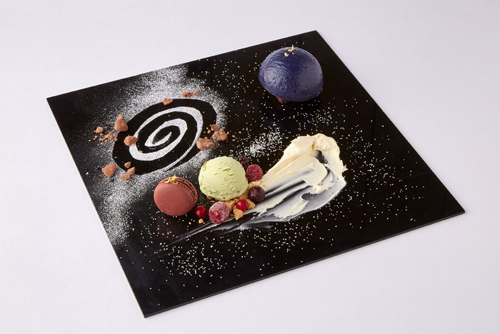 A space station view of the cosmos! 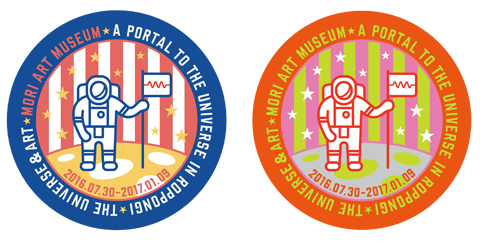 In addition, customers ordering from the tie-in menu will receive a free coaster based on the “Mission Emblem” designed for the exhibition (9 cm in diameter, color cannot be chosen).

The Cafe Area THE SUN of the Museum Cafe & Restaurant THE SUN & THE MOON will be closed to public on October 20, 26 and 27 due to some exclusive events. Thank you for your understanding. 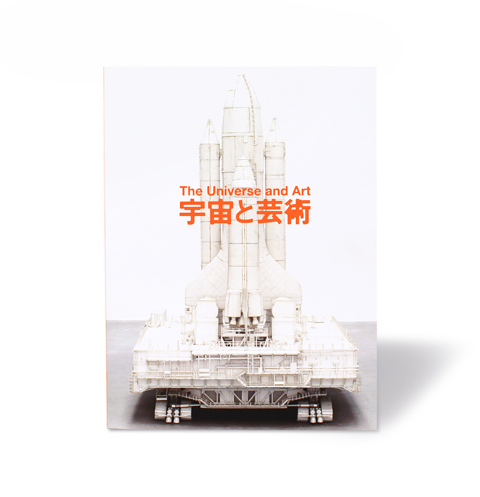 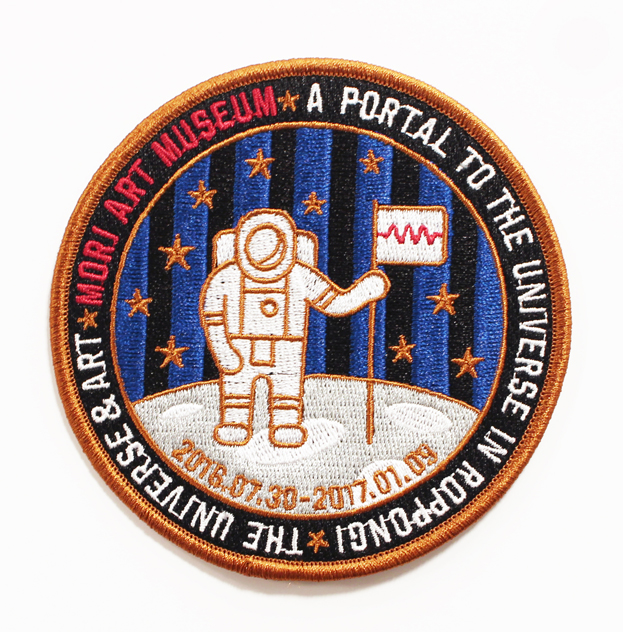 “The Universe and Art” catalogue & original Mission Emblem set 3,600 yen (incl. tax)
As well as all the works on rotating display, such as the da Vinci manuscripts and the mandalas, “The Universe and Art” catalogue contains absorbing essays by a first-class lineup of writers. This fascinating catalogue also containing commentaries on all the works on show comes with a free “Mission Emblem” designed exclusively for the exhibition.
Supplies are limited, so be in quick!

“The Universe and Art” Special Trailer

“The Universe and Art” Exhibition Limited-Edition Design Passport on Sale 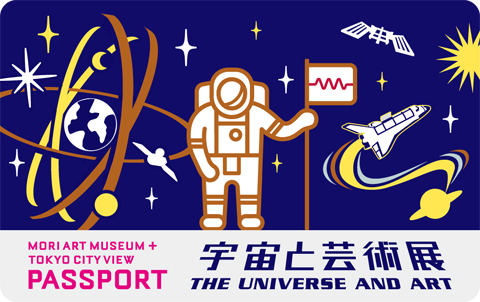 To commemorate the opening of the exhibition “The Universe and Art,” limited edition design Passport is now on sale.
The card is originally and uniquely designed for the exhibition, with such motifs as astronaut, rocket, planets etc. Buy one on your visit! 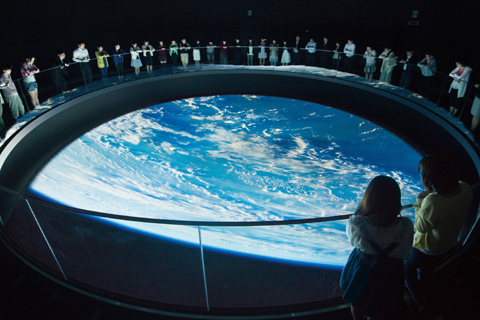 TeNQ Space Museum is a new entertainment venue where visitors could enjoy unforgettable starry sky, sensation of overpowering cosmic space, the latest science, and culture inspired from space.
Why not visit both TeNQ and “The Universe and Art” exhibition at the Mori Art Museum and learn more about the Universe?

Open hours:
11:00-21:00 on weekdays (Last admission at 20:00)
10:00-21:00 on Saturdays, Sundays, holidays, and specified dates (Last admission at 20:00)
* “Specified Dates” are Golden Week, spring/summer/winter school holidays, etc.
* Open everyday (with some closures for scheduled equipment maintenance and special events)
Place: Tokyo Dome City, Yellow Building 6F
Admission: Adult 1,800 yen (Day Ticket) and others
* Admission to TeNQ is at specific days and times only.
* Children under age 4 may not permitted to enter the museum 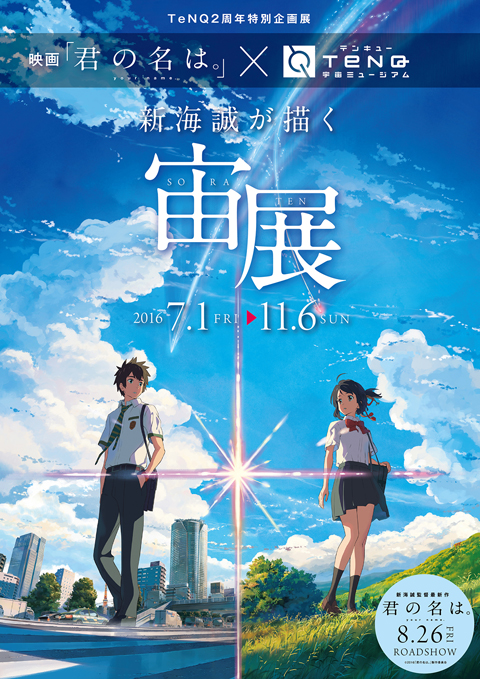 Now on view at TeNQ!

What sort of scenery comes to mind when you hear the word “sky” (sora)?
The crowded urban sky framed by soaring buildings, the rural night sky carpeted with stars, the dark reaches of outer space seeping through the space between those stars... The sky, and deep space beyond, is always spread out uniformly above us.
Animation director Shinkai Makoto, renowned inside and outside Japan for the intricacy and detail of his work, has depicted the sky and space many times in his visual creations. This exhibit focuses on the new motion picture "your name.," opening in theaters this summer, to present various displays on the process of drawing the film’s gorgeous skyscapes. We also introduce the connection between Shinkai’s works and the sora (sky and space) through his own explanations of his inspiration and ideas about the sora.

Period: Thru Sunday, November 6, 2016
Venue: Gallery within TeNQ
Admission: Included in the admission to TeNQ
Details of “Sora Exhibit Envisioned by Makoto Shinkai” here: https://www.tokyo-dome.co.jp/tenq/exhibition/7/
* In Japanese-language only

Live streaming of the event on July 30!

Artists’ Talk by artists in the exhibition will be live streamed!
Check out Mori Art Museum's official Twitter and watch Periscope live!
If you couldn't book the program, catch this live streaming!

The audio guide devices (Japanese / English), introducing the main pieces exhibited in “The Universe and Art,” are available for the visitors to the Museum at the entrance hall on the 53F. Japanese version audio guide features Shinohara Tomoe, a Japanese TV talent. In addition, Inoko Toshiyuki, founder of teamLab, gives introduction and commentary on teamLab’s latest installation work specially commissioned for the exhibition.

At “The Universe and Art” exhibition, special “Passport” is available to enhance the children's enjoyment.
If you complete all the missions, you will get an exclusive sticker.
Download PDF version of the Passport here:
PDF (PDF/2.04MB) * Supplementary English text here (PDF/161KB)

Notice About The Exhibits

“MAM Screen 004: Watching the Earth from the Universe”

“MAM Screen 004,” which will run concurrently, features single-channel video works in conjunction with “The Universe and Art.” 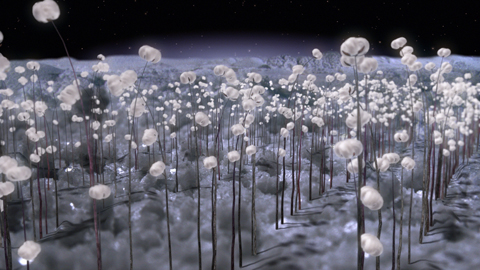 At “The Universe and Art” you may photograph some of the artworks / areas. Please read the notice indicated at the entrance of each galleries. Photography is however NOT allowed for “MAM Screen 004” and “MAM Research 004.”
Details: here