MAM Collection 009 will present What the Birds Knew (2012), a sculpture in the form of a glowing green ant made using uranium glass and UV lighting, by Japanese/Australian artist unit Ken + Julia Yonetani (b. 1971 and b. 1972 in Tokyo, respectively).
In Arnhem Land, Northern Australia, the local Aboriginal legend of the “Green Ant Dreaming” holds that if the earth there is dug up, a giant green ant will emerge from underground to destroy the world. Despite this, during the 1970s uranium mining commenced in the region against the wishes of the local indigenous population. What the Birds Knew was created following the artists’ research on mining in the region and the “Green Ant Dreaming” legend, which may also be interpreted as a warning for the future. Taking its title from Kurosawa Akira’s film I Live in Fear [Ikimono no kiroku] (also known as What the Birds Knew, 1955), which depicted a man terrified by the prospect of nuclear attack, Ken + Julia Yonetani’s enormous glowing ant creation can be seen to raise issues concerning nuclear power generation and nuclear weapons, both fueled by uranium.

* The artists would like to pay respect to the Kuwinjku people, their Country and their stories including the Gabo Djang, “Green Ant Dreaming.”

Ken Yonetani (b. 1971 in Tokyo) and Julia Yonetani (b. 1972 in Tokyo) began working as a unit following the 53rd Venice Biennale in 2009, at which Ken was one of the artists representing Australia. Major recent exhibitions for the duo include the Singapore Biennale 2013, The Last Temptation: the Art of Ken + Julia Yonetani at the National Gallery of Australia (Canberra, 2015), and Kenpoku Art (Ibaraki, 2016).

At the exhibition MAM Collection 009: Ken + Julia Yonetani, you may take photographs/film the artworks under the following conditions. 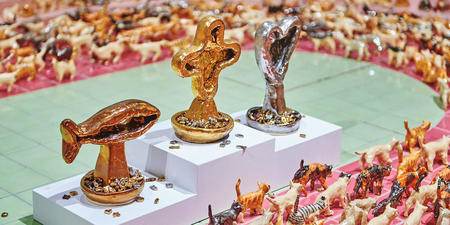 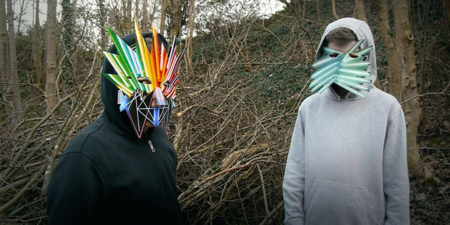