The title for this exhibition “Invisible Cities” takes its name from the novel by Italian writer Italo Calvino. In Calvino’s fictional account, Marco Polo - describes to Mongol emperor and Yuan Dynasty founder Kublai Khan the many amazing cities encountered on his journeys.

People have always harbored dreams of ideal societies and urban settlements, and architecture and cities are perhaps tangible manifestations of one part of those “invisible” dreams. Yet the buildings and cities that actually come to fruition do so with the potential to be destroyed by disaster, or to age and fall into ruin, over time leaving only their remains. Utopian architecture and cities likely remain Utopian for the very reason that they never become reality. In today’s world where the internet has become a norm, architecture and cities are also starting to proliferate in network form by transcending physical space, said to have become what cannot be explained by conventional concepts.

Lee Bul’s Aubade, resembling a piece of Utopian architecture echoing the Russian avant-garde, but with Esperanto glowing in neon; Jagannath Panda’s The Epic III, which appears to show the city as a new species of organism in which high-rise, hi-tech architecture merges with myth, flora and fauna amid a world of galloping globalization; and Kurokawa Kisho’s fleeting Metabolist Yamagata Hawaii Dreamland destined to be demolished after less than five years; all three works showcased at this exhibition are sure to prompt contemplation on the place of architecture, and cities, in tracing human ideals and dreams.

At the exhibition “MAM Collection 007: Invisible Cities,” you may take photographs under the following conditions. 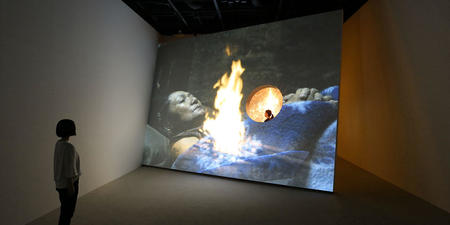