What Is True Affluence, What Is It to Be Human, What Is Life?

New cities being constructed are starting to make the leap beyond conventional urban parameters to desert, sea and air. They are reminiscent of, almost a revival of Metabolism(*) envisaged and conceptualized by young Japanese architects during the 1960s. Most of them did not come to fruition with then technologies, however, with the advances of information technology and biotechnology, the real Metabolism cities that are sustainable, and environmentally-sound are becoming possible. In this section, we look at the leading examples of urban planning, and the truly unique visions of artists and architects, via photographs, video and models and more.

* Metabolism: Japan’s unique architectural movement and theory developed in the 1960s by Kurokawa Kisho, Kikutake Kiyonori, Maki Fumihiko and Ekuan Kenji. The term was derived from the word metabolism, based on the philosophy that architecture and city should be designed organically just as life repeats growth and change.

This section will introduce and discuss possibilities of today’s architecture as exemplified by the development of environmentally-friendly organic building materials and some new construction methods that fully utilize advanced technologies represented by 3D printers, drones, robotics and such. Coexisting with nature, sustainable and dynamic, they flexibly metabolize - suggesting the possibilities of Neo-Metabolism architecture.

Technical innovations are steadily altering the way we eat, dress and live. The appearance of computer modeling and 3D printing has changed the course of design history, while the development of artificial foodstuffs, for example, has emerged as one solution to global challenges such as population growth and food shortages. This section looks at the kinds of design and products emerging from the latest technologies and radical new concepts, and explores their potential to generate new lifestyles.

Advances in robotics and biotechnology help expand human capacity while making it possible to overcome incurable diseases. As wonderful as it all sounds, this also raises ethical questions about the extent to which we as humans should be altering our bodies. This section focuses on the body, that greatest of all human concerns.

Section 5 Society and Humans in Transformation

Technological developments and the concomitant changes in outlook overturn previously-accepted notions of society and what it is to be human. In future we may see humans being nursed by robots, for instance, or “sharing” of children with the DNA of three or more parents. This last section in the exhibition urges us to rethink the definition of “human,” “life” and “happiness,” and questions what we should do to move to a better future. 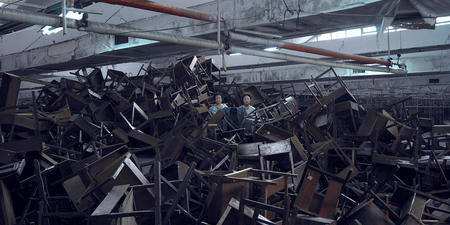