* in alphabetical order of the artists’ surnames

It is with deep sadness that we inform you of the November 14 passing of Etel Adnan, one of the sixteen participating artists. We’d like to express our sympathies and extend sincere condolences to the artist’s family and friends.

[B.1925 in Beirut, and died 2021 in Paris]
Since the 1960s, as poet, novelist and painter, Adnan’s work bridges imagery and text, the East and the West, as well as modern and contemporary, while mirroring in her life story of traveling between the continents and cultural spheres. In particular, Japanese culture has served as an inspiration for many works without her even visiting Japan, ever. Her work reflects a sensitive, dynamic relationship with the world, exploring multi-layered matters related to landscape, abstraction, color, writing, memory and history. A subtle political undertone is dominant in the broad spectrum of her works, as Adnan expresses a strong sense of solidarity with anti-war movements worldwide.

[B. 1944 in Newcastle upon Tyne, UK]
Barlow grew up in London as the city recovered from the WWII, and went on to study art there. Working in painting and sculpture, she is concerned not only with the beauty of surfaces and forms of materials, but their condition/state in terms of qualities such as time, mass, balance and rhythm, and creates sculptural works in state of transformation - often structures or forms seemingly on the verge of collapse, or of standing upright. She employs inexpensive industrial materials such as concrete, plywood and cardboard, the tense balance between these bare materials providing the underlying element for all her works. Barlow represented UK at the 57th Venice Biennale in 2017.

[B. 1946 in Cairo]
Boghiguian studied political science in the 1960s, before moving to Montreal in the 1970s to study art and music. She now lives rather nomadic, moving around the globe, researching the history, politics and social conditions of each place she stays and lingers in, linking her findings to transnational themes, and exploring mutual connections. Her cutout-drawing installations reminiscent of shadow-puppet theater speak eloquently of the contrasting light and shade of modern society, made visible by her bird’s-eye view of the world. Since documenta 13 in 2012, Boghiguian has been featured in a number of large-scale solo shows and international exhibitions.

[B. 1949 in Basel, Switzerland]
Influenced by social trends such as the anti-nuclear movement, Cahn started her career as an artist in the 1970s. Her charcoal drawings distinguished by powerful lines as well as her vibrantly-colored oil paintings are intimately connected to social issues such as discrimination and violence, to war, and to her own identity as a Jewish woman. In 2017, she took part in documenta 14, and in 2019 had a major solo show that toured to the Kunstmuseum Bern, Haus der Kunst (Munich), and Museum of Modern Art, Warsaw.

[B. 1941 in Roeselare, Belgium]
Dujourie’s early works are regarded as a feminist reaction on the impersonal dogmas of the Minimalism during the 1960s. Starting from a relation to body, matter, and culture at large, her artistic practice unfolded into her own intimate artistic terra incognita by combining painting, sculpture, film, performance and photography. In silence, muteness and poetic expression of absence, all of which are distinct elements that characterize her works, “pause” is frequently celebrated as a necessary condition for an action. In Another Energy, Dujourie is to present sculptures, works on paper, and video work covering various periods of her practice from 1967 to 2009.

[B. 1933 in Rio de Janeiro]
Geiger is amongst the most important contemporary artists in Brazil. Since the 1950s, she’s built up an oeuvre where engagement and experimentation stand central. Her early abstract work connected with the body in the same way as her work in other media such as print, video and sculpture always kept a relation to the social situation surrounding her. Her personal standing as a child of a Polish migrant family, operating on the margins of Western modernization within the deep political turbulences of Brazil, has caused her to continuously examine the issues of geopolitical borders and identities.

[B. 1932 in Bucamaranga, Colombia]
González started practicing art in the 1960s after studying architecture, painting and art history. She produced works by appropriating images both from Western art history and local newspapers, modifying them through a language based on figuration, flat surfaces, and a broad color palette. Not confined to the canvas format, she explored everyday supports - curtains, furniture, wallpapers, which have similarities with the pop art movement. At Another Energy, works in different media referring to the socio-political conflicts in her home country of Colombia will be showcased.

[B. 1915 in Havana]
Herrera is considered as one of the pioneers of geometric abstraction in the U.S. After studying architecture in Havana, she studied painting at the Art Students League in New York. She befriended artists of then-newly-emerging Abstract Expressionism. Later in postwar period, she moved to Paris where art and literature burgeoned. Since the 1960s, she has produced “Estructuras (Structures)” sculpture series furthering the architectonically-oriented abstraction, aside from her paintings. What characterizes her entire oeuvre is her quest for humanism far beyond any -ism taken as trends in the art world.

[B. 1946 in Buyeo, South Korea]
After studying art at the College of Fine Arts, Seoul National University, Kim moved to France in 1971. Working in diverse multimedia art including video, performance, installation, sound, sculpture, photography, she conducts international artistic activities and has undertaken studies in semiology and aesthetics. Deeply influenced by Buddhist and Taoist philosophies and Wittgenstein’s investigation on language, she through her works explores the nature of time or the language game, and questions of life and art. In recent years, she has developed an interest in science and technology, expanding her creative output to encompass installations employing robotics and AI. In 2019, her retrospective Kim Soun-Gui: Lazy Clouds was staged at the National Museum of Modern and Contemporary Art, Korea in Seoul.

[B. 1945 in Wasco, CA]
Lacy, an educator and author, is considered a pioneering figure in the realm of so-called Socially Engaged Art. Based mainly in Los Angeles since the 1970s, through her dialogue with communities there she has addressed social issues such as feminism, racism, aging and violence, and other urban problems. She’s been extremely proactive; employing performance, video, photography, community activities and other media in a vast output diverse in both scale and mode of expression, from personal works taking her own body as the subject, to ambitious projects involving hundreds of performers.

[B. 1932 in Osaka]
Mishima first garnered attention for her highly-experimental two-dimensional works in the late 1950s, including oil paintings and collages made from printed and waste materials. Since 1973, she has made sculptural pieces with silkscreen printing on ceramics where the incongruity between surface and materials - the likes of newsprint and empty cans being reproduced on the non-disposable material of clay - serves as a critique of then newly growing consumerist, digital society. She continues to make art at a prolific rate, turning out large-scale installations and three-dimensional works, and in recent years has enjoyed a burgeoning reputation both in her homeland of Japan and beyond.

[B. 1942 in Tokyo]
After graduating from the Gendai Bijutsu Kenkyujo (Contemporary Art Research Studio) in 1964, Miyamoto moved to the U.S., where she attended the Art Students League, settling in New York. Continuing her studies on Minimalism while working as an assistant to Sol LeWitt, she also began to address her own personal identity in the melting pot of New York, and became heavily involved in the activities of the A.I.R. Gallery set up in 1972 by a group of female practitioners. In addition to her string installations based on meticulous drawings, Miyamoto continues to work in a variety of media including sculpture and performance.

[B. 1943 in Chicago, IL]
Nengudi’s artistic practice combines sculpture, performance and dance. She moved to Tokyo and studied at Waseda University for a year in the 1960s, to immerse in Japanese culture and to learn about the Gutai Art Association. Since then, influences of Japanese theatrical forms such as Kabuki and Butoh, as well as West African ritual practices help build more of her visual language. Above all, a number of her sculptures produced in the 1960s-70s were intended for the moment of their presentation; thereby no longer exist. “Permanence has never been a priority for me - to the chagrin of many,” she noted in one of her statements. The objective of art, according to her, is thus not its conservation and canonization, but instead, its steady potential to be open and to continue.

[B. 1948 in Lawang, East Jawa, Indonesia]
An aspiring painter from a young age, Nunung studied fine art at the Surabaya Fine Arts Academy. Reflecting the traditional Islamic prohibition of idolatry, she has since the very beginning of her career focused on paintings in geometric abstractionism style, doing away with shapes, and layering colors, to explore its infinite possibilities. She owes a great deal of her inspiration to the mountain landscapes and sunlight of Java, and other aspects of its natural environment that surround her daily, and the spiritual qualities of that environment. Her painting also resonates with the energy dwelling in traditional textiles, where the intersection of warp and weft creates new colors.

[B. 1937 in Baranagar, India]
In the 1950s soon after India’s Independence from Britain, Singh studied art in Delhi and began to show her work. During the 1970s-80s, she explored new materials and techniques through abstract drawings, and went on to exhibit at a series of shows in Europe and elsewhere amid burgeoning international interest in Indian contemporary art. In the 1990s, as text and numbers began to appear in Singh’s paintings, they developed into picture planes weaving abstract and figurative together, painterly imagery, text and numbers to form a harmonious whole, depicting fragments of the world of the sort routinely absorbed from sources such as advertising signage, TV and newspapers.

[Born 1946 in Te Puke, New Zealand]
As a student, White studied under the prominent figure of New Zealand Modernism Colin McCahon. Moving to the Otago Peninsula, by around 1972 she became known as one of the New Zealand regionalists, with a style characterized by bold contouring. In 1982, she moved with her family to the Pacific nation of Kiribati and lived there for 17 years, taking the opportunity to expand her concept of art by engaging in the Island’s traditional collaborative work. Recent years have seen White working actively on a series of projects alongside women from Kiribati, Fiji and Tonga and elsewhere in the Pacific. 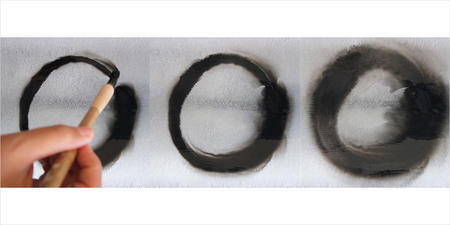 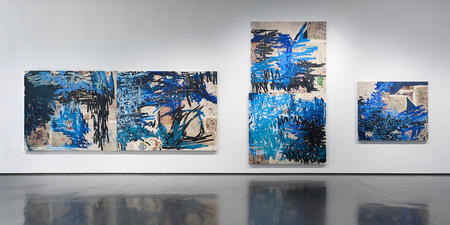